When it comes to excellence in display technology and televisions in general, Samsung has been the undisputed number 1 brand worldwide for 16 years. Besides being leaders in many gadget segments, high-resolution QLED TVs are something Samsung has always represented the pinnacle of, and the new addition to the company’s flagship Samsung Neo QLED 8K and 4K range of TVs continues the tradition of leading the way. the race continues.

The upgraded Samsung Neo QLED 8K TV literally ‘squeezed’ the competition with new features and has teamed up with Aanchal Thakur, India’s first international ski medalist, to bring the visual range and aural power of the new Samsung Neo QLED 8K into the ‘Highlight of India’ campaign. This campaign, through the eyes of Aanchal Thakur, reflects how Samsung continues to push the boundaries and scale new heights of technological innovations.

The highlight of India’ campaign vividly portrays a near-realistic experience of skiing majestic snow-capped mountains that ignited Aanchal Thakur’s passion to conquer the world with her exceptional skiing skills. The upgraded Neo QLED TV screens feature a 100 Million Lights that makes details come to life like never before.

Samsung Neo QLED TV: there’s something for everyone

The Samsung Neo QLED TV has such powerfully bright screens that it does not compromise on image quality regardless of the lighting conditions in the room. And depending on the size of the room, you can select a TV that fits right into the 50-inch, 55-inch, 65-inch, 75-inch, and largest 85-inch option. Although the dimensions may vary, the performance and sound quality are in equal measure.

The brightest and most diverse color display

Let’s start by talking about the incredibly bright display of the Samsung QN90B Neo QLED TV, which is equipped with the Quantum Matrix technology. The screen supports resolution up to 3840 x 2160 with an anti-reflective coating on top for viewing from any angle. HDR10+ Adaptive & HDR10+ GAMING improve the visuals not only for gaming, but also for the overall TV viewing experience. And most importantly, the Film and Filmmaker mode is also included, which is recommended by directors for watching movies.

The Quantum Matrix technology translates to the panel with quantum mini LEDs that are 40 times smaller than the regular LED pixels, giving more color control to the panel to make the finer details appear sharper.

Shape Adaptive Light Control technology uses precise analysis of the scene being produced and the various objects in it. This helps it control the lighting accordingly, resulting in the dark areas that are really dark and the lit areas of the screen appearing with greater highlights and exceptionally well-defined object edges. This makes images brighter without the blooming effect of light bleeding from adjacent pixels.

The Neo Quantum Processor 4K upscales images to 4K. In addition, the AI-based deep learning technology with the Real Depth Enhancer ensures that the color of the scene is optimized along with less noise, richer details and sharper textures. As for the resolution AI upscaling, this is done using Multi-intelligence, where the TV recognizes the Three Dimensional Depth to create a contrasting image.

The new QN90B Neo QLED TV comes with an EyeComfort mode that optimizes brightness levels based on room brightness and overall picture quality, along with reducing blue light for a better night’s sleep.

Sound that brings the theater home

The audio quality of TVs has always been compared to that of the theater experience and for a user, accurate and dynamic theater like audio has always been important. This is where the Samsung Neo QLED TV excels and fulfills the user’s need to feel at home as if they were in a theater.

The QN90B Neo QLED TV with Q-series soundbars features the world’s first wireless Dolby Atmos with a speaker from above to give the comparison a little more height, providing a true theater-like experience with surround sound experience for a complete cinematic immersive experience.

In addition, the Object Tracking Sound+ feature analyzes input and content (e.g. movies, streaming, sports, gaming) and optimizes and directs the sounds to the relevant speakers in your TV, allowing sound to move with the action. For example, a race car moving from the right to the left of the screen would move the audio from the right speaker to the left speaker. On the other hand, the Voice Tracking Sound feature detects people’s faces and moving lips on the screen to produce audio from the nearest speakers, giving the scene a real sense of location.

Samsung brings industry-leading technology to the QN90B Neo QLED TVs. The redesigned SmartHub screen gives users instant access to the content recommendations of all apps. These also include recommendations from apps that the user is not subscribed to. These can also be customized based on the user accessing the TV and their preferences. In addition, it supports multiple users where everyone in the family can have their own profiles with independent sets of recommendations.

It happens all too often that a user looking for a particular movie has to log into multiple OTT platforms to search for the same thing until they come across it, well, no more. Now, with the improved search function when the user searches for certain content using text or voice, the Samsung Neo QLED TV shows which service has the specific content available. The Samsung TV+ app also offers select free live channels, essentially eliminating the need for an independent cable connection to access the channels.

The Samsung QN90B Neo QLED TV acts as a central hub to control all IoT devices in the home with the updated SmartThings app. Users can ask the TV to turn on the air conditioner and see who is at the door with their smart camera doorbell.

The TV also comes with the Multiview feature that splits the screen so that users can essentially watch and do multiple things at once, such as video calls while watching TV and even while gaming.

Samsung Neo QLED TV supports the SlimFit camera with the QN90B Neo QLED, a minimal and slim webcam mount for the TV. Users can video call and meet in the large screen format, which makes viewing multiple small user windows clear. The user can use the video conferencing feature with the Google Duo app.

Gaming has recently become an important aspect of TVs, especially since the recent pandemic has tied people to their homes, who in turn spent their time gaming with more game consoles being sold than ever. And modern consoles support images up to 120Hz at higher resolutions, meaning TVs should be capable enough to display those images. And the Samsung QN90B Neo QLED TV not only qualifies for that, but goes further. The 50-inch variant supports up to 144Hz, while the others support up to 120Hz. 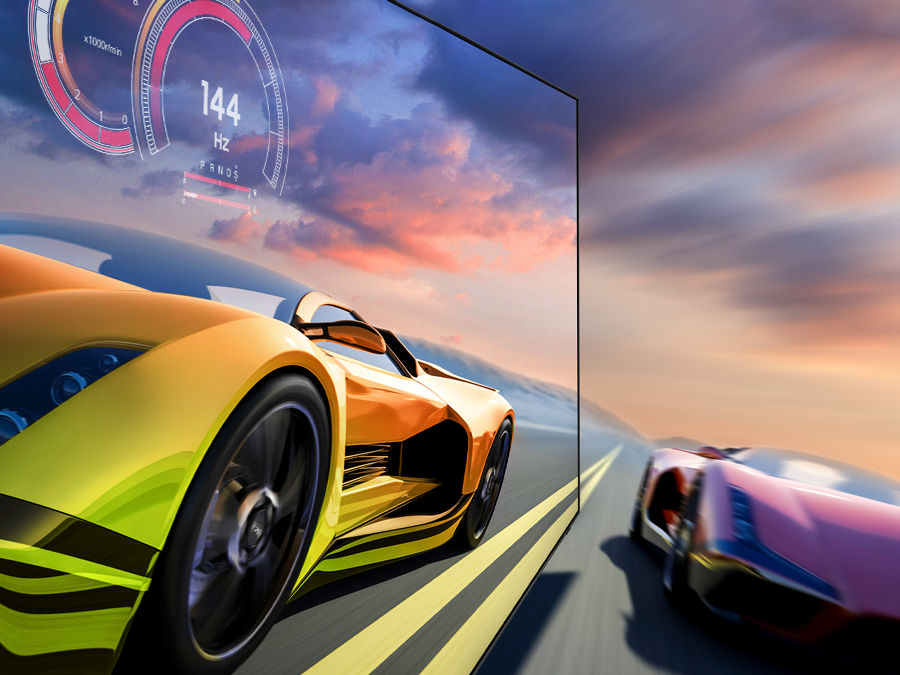 The QN90B Neo QLED TV comes with four HDMI 2.1 ports which, along with the automatic low latency mode, ensures that there is no lag between the output from the consoles and the screen on the TV. It also comes with an ultra-wide mode with 32:9, especially for gaming where the player can see more in the game, making it impossible for them to be flanked by the enemies. This can be used with a split screen where a video of the same game can be viewed on YouTube while it is played on the screen in real time.

The TV also comes with Game Bar 2.0, which provides quick access to the critical options while gaming for a quick switch. Oh, and it also has a zoom in mode where the minimap is displayed in a larger split screen format to clearly track enemies.

Samsung QN90B Neo QLED TV is a must have

And what’s more, the Samsung Neo QLED TVs are currently available with festive offers website as part of the Big TV Festival. So start the holidays off right with Samsung Big TV Festival. Buy a Samsung big screen TV, get a Galaxy S22 Ultra or a Galaxy A32 absolutely free*! And there’s more! Get up to 5 years warranty* and up to 20% cashback* with EMIs from ₹990*. Get a Samsung TV with a big screen now: https://www.samsung.com/in/tvs/all-tvs/?neo-qled. *Terms and Conditions apply.

Thanks for reading to the end of this article. For more such informative and exclusive technical content, such as our Facebook page